....And No, Not That Hack Kurtzman

First of all...You had to ask, didn't you !? In your last letter, you asked if the Johanna was still afloat. Well, it's not anymore. While you were writing a letter to Robert Meyer Burnett. she hit a sandbar and snapped like a twig.

The good news is that we were near an island with people and internet. The bad news is that nobody understand a word these people are saying, so we have no idea where we are. And even if we did, because the Johanna was a tramp freighter, there is no company to come to rescue. So I'm safe, but I'm stranded.

We managed to salvage enough food and water for a couple of days, a couple of books and two laptops. But beyond that, we only have the clothes on our backs. And it's all your fault !! If you hadn't asked...

Read more »
Posted by Edmond Dantes at 1:57 AM No comments:

Email ThisBlogThis!Share to TwitterShare to FacebookShare to Pinterest
Labels: Other, TV-shows, useless

To begin with, is the Johanna still afloat ? Send you letters is going to be really hard if it sinks and you end up stranded on some island. And that's the best case scenario. Anyway, I don't have a big story, just small bits and pieces. Starting with....

In my last Trek article/letter - about it being in deep trouble - I said that a lot of critics would be gone soon. And that it was a longer story. Turns out it's not that long a story. You see, a while ago, Buzzfeed went public. And it didn't go well. In a matter of days, the stock went from $10 - which isn't that much - to only $5. It also didn't help that the employees couldn't sell their stocks due to some kind of mess-up.

Fast forward a couple of days and BuzzFeed's owner - Polygon - buys up one of its competitors, Voxmedia. Which is bad for the people working there. Whenever there's a merger, layoff's are never far behind. The problem is that two sites making too little, is still too little. Or put another way, two times zero is still zero. If this becomes a trend, the news sites are going to cannibalize one another. So it's not going to be a pop, but more of an implosion. Only time will tell, so moving on to...

After I posted Chapter 18, I felt I needed a break to recharge the creative battery. Also, things got insanely busy at my day job. Which I why I haven't been writing letters for a while either. Also, what little free time I did have, was being taken by playing the Outer Worlds. (Great game, for the record. It was a bit short at first, but the DLCs fixed that.)

But now, with Christmas behind us, the dust is settling and I can get back to it. So that is the plan. I want to write Chapter 19 and 20 and then leave it on a cliffhanger. (And nope, I'm not going to tell you what it is going to be.) Today, however, is going to be me finishing Outer Worlds. <G> Finally, I want to talk about...

Speaking of things I haven't done recently....I haven't written to The Burnettwork for a while. Simply because I didn't feel like I had anything good to say. It was a case of quality over quantity. But now I want to try to get back into it again. All I need is something to write about/meaningful to say.

And that's all I have for today,

Posted by Edmond Dantes at 4:45 PM No comments:

Email ThisBlogThis!Share to TwitterShare to FacebookShare to Pinterest
Labels: Other, RPG

An Open Letter to Robert Meyer Burnett and Joseph Mallozzi 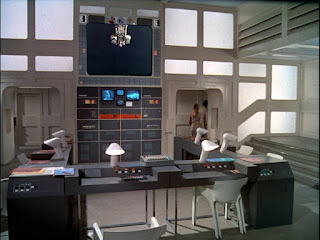 Thanks for you letters/blogs. I have landed a job on a tramp freight called the Johanna, so writing back has not been easy. (Surprisingly, WiFi in middle on the oceans is really spotty.) And there isn't really much entertainment on this rust bucket. (Trust me, it's a rust bucket. One sneeze and the Johanna would probably snap in half.)

To pass the time, I've been working on a mini pitch. Could you please put it up on your blog ? Oh, and why are Hollywood people so crossover phobic ?

From the oceans with love,

Read more »
Posted by Edmond Dantes at 9:37 PM No comments:

Email ThisBlogThis!Share to TwitterShare to FacebookShare to Pinterest
Labels: TV-shows

Star Trek is in Deep Trouble

And It Is Only Going to Get Worse

I have never made a secret of the fact that I am not a fan of Star Trek: Discovery and Star Trek: Picard. For a long, long list of reasons - which I don't want to bore you with - I think they are bad shows. For those of you who do want the dusty details, here's a link to some of them.

All you have to do, is go to Rotten Tomatoes or Metacritic, and check the audience scores. I know, I know, people love to complain about how Rotten Tomatoes is....well, Rotten. And that the professional critics are just shills, who don't give their real opinion. Instead, they simply write whatever the studios and the politicians pay them to write. And, you know what, they are right.

But at the end of the day, the critics don't matter as much as studios and the politicians think they do. Because the critics don't keep the streaming services afloat. Nor provide the DVD sales the studio want. The average Joe's and Jane's do. So forget the "Critics" and their "Opinions." Besides, if the Buzzfeed stock disaster is anything to go by, half of them will be gone soon. (But that's another story for another time.)

Any how, back to the subject at hand. Because the audience scores for Discovery and Picard are only going one way....Down.

About number five....I can't blame the lady for walking away. Kurtzman had fracked up the management of Trek and Clarice badly. But his planet sized ego would never allow him to admit that. So who gets all the blame ? She does. (I know, I know, the articles say she left on friendly terms, but I ain't buying it for a second.) Moving on to....

Read more »
Posted by Edmond Dantes at 8:12 PM No comments: 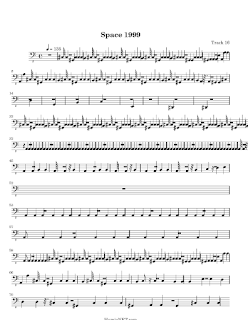 Taking another stab at the subject of....music. Which is kinda of new - and strange - for me. Like I said last time, this used to be my friend Rick's thing. But, stuff happened, and here we are. So, let's this thing underway. To begin with...

When I decided to write this blog, I wanted to add a suitable picture. Which was how ended up with a picture of sheet music. And I picked a song I liked....the Space: 1999 theme song.

And yes, I know there are two. Starting with the Season Two one, I label it....meh. (Not good, not bad, just...average.) But the Season One opening theme...That is an ear-worm. It just sticks in your head and refuses to let go. A really good version can be heard here.

Called Adding Balance (<--Link), this entry included a Dutch song called "Voor Een Verre Prinses." Which I figured would make for a good song if translated into English. But I didn't provide enough of an explanation about the song.

The song is about a man who is listening to the radio as he lays in bed. The songs playing stir up his memories of an old love. He regrets not sleeping with her and the end of their relationship. Finally, the moment is broken when the news comes on, followed by the (Dutch) national anthem.

It's a Dutch bluesy song, proving that the US doesn't have the monopoly on that style of music. And it's a good one, in my humble opinion. Of course, you would have to change it some of it to make work in English. But I still think it would be good. Finally, I want to discuss...

The Worst Christmas Song Ever

I could make this a long section, but it's not going to be. Whoever allowed "Last Christmas" by Wham ! to be made, should be charged under the Geneva Convention. That song is a crime against humanity ! I don't care what the experts say, throw them in the slammer !  (It's torture, torture !)

Posted by Edmond Dantes at 8:43 PM No comments:

#1A Extra information on the Abba Americanus 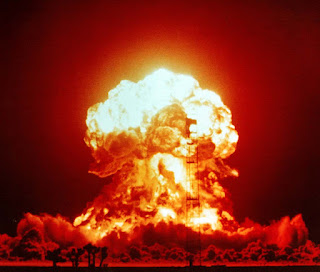 Greeting, fellow Scientists. This episode is an addendum Vol. 1 "Why you should never date American Girls/Women." It provides extra information on dangerous sub-species of the Abba Americanus aka "American Dad." Starting with....

Generally known as the American Military Dad, this subspecies is extra dangerous because it has access to larger amounts of firepower.

Picture One shows an American Military Dad "Communicating." with a potential mate.

Found outside the major urban centers of the United States, this sub-species uses lives in a small town or on a farm in the middle of nowhere. This species of American dad is extra dangerous because of their location, which is usually sparsely patrolled by law enforcement. This allows them to "Communicate" with potential mates without fear of reprisals. Furthermore, they are able to dispose of former potential mates by burying that little remains after "communication" in some random field.

And that concludes today's episode.

Posted by Edmond Dantes at 11:41 AM No comments:

Okay, to begin with, turns out that you are female. As for what you look like, well.....It took some digging, but I found my mental picture of you. (Hidden between grandma Coulson's secret chocolate chip cookies recipe and a pile of The Doctor's old socks. What can I say ? My mind can be messy.) Any how....

You are African-American, with your hair in a short pixie cut. It was dyed blond in the picture, do you still do that ? Not very surprising, you have brown eyes. But what really surprised me, was the Mackenzie Calhoun-like scar on your right cheek. I keep forgetting you have that. Maybe you'll tell me how you got it one day ? For now, however, I think we should move on to....

Why I don't talk about Politics about a lot

Well, because I am simply not a fan of politicians. A lot of my political post are my ranting at Trump. Who was an idiotic president and now is an idiotic ex-president. And I'm not happy about many a Dutch politician either. If I talked about politics, this would be one of those 'old man angry at clouds' type of blog. Which I don't want to be. Besides, there are plenty of those out there already. And we're walking...

Into a Short Dark Empire update

Chapters 16 and 17 are in the can. My day job ate all my energy for a while, but now I am back to working on Chapter 18. And, trust me, it contains a whopper of a surprise. (But I'm not saying. Muhahahahaha !) And that's all, people.

Posted by Edmond Dantes at 10:33 PM No comments:

More Information About Me

Edmond Dantes
Welcome to Xanthi Rising. This blog is where I (try to) update the world on what I am doing, and what I am planning. Thank you for your visit.